The thin curve of Leonor’s right eyebrow turns sharp when she watches her story land on her listener. She anticipates your reaction, because unlike many Nicaraguan women, Leonor tells 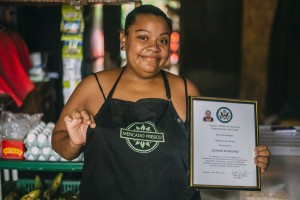 her story over and over to anyone that will listen. Leonor is a mover and a shaker in her community. At sixteen, The Nicaraguan Youth Coalition under the United Nations Civil Rights Council, recruited members at her high school. The activists would not be paid, but would travel all over the country to hear the concerns of the people outside of the capital. Then the activists would shape protests to work towards a true democratic system. Leonor and her future husband, José, both signed up immediately. Together, they began a pursuit that has continued for the past fourteen years, working towards access to education for those in extreme poverty outside Managua, and women’s rights throughout the country.

Leonor’s body tells the story of her activism. She points to a scar above one eye, a mark from a time when a rug was thrown at her in opposition to her protests. She shows more scars on her arm, from when the opposition tracked her down after a Civil Coordinating Committee meeting, and broke her arm in three places to convince her not to get involved with the Youth Coalition. The case she filed about this incident has been open for six years without conclusion. The most recent incident didn’t leave a physical mark, but certainly will forever be imprinted in Leonor’s memory. After numerous threatening phone messages, a man approached her as she left home, held a gun to her head, and said if she didn’t stop protesting, they would kill her and her family. She didn’t back down, so he pulled the trigger. Leonor says God was on her side because the gun mysteriously didn’t fire. As Leonor tells these stories, she clings tightly to a framed certificate from the United Nations Civil Rights Council that reads “Woman of Courage,” a sign she keeps hanging right above her Mercado Fresco store.

That same perseverance that her certificate honors has made her a successful store operator. She and her husband lost their jobs fighting for democracy, fighting for those in her country who have worse conditions than they do. In her modest situation, she still thinks of those with greater need. Mercado Fresco has given her family an opportunity to earn an income, when no one else would hire them. It also allows Leonor to stay home with her first born, a four-month-old baby girl named Mayerlin. She is so proud of her ability to earn an income for her family, to build a better roof that doesn’t let the rain in, to get the right baby food for her daughter. Her husband and her continue to be activists, hoping to see change in their country. Leonor knows the power of her story and Mercado Fresco allows her to keep telling it, without fearing unemployment. 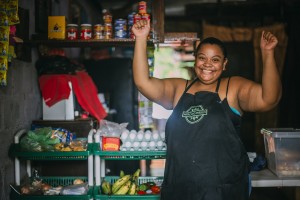