With danger on the streets keeping citizens grounded and other food sources in jeopardy, our home-based stores are becoming a central source of food for their neighborhoods. As businesses close, a crisis of unemployment is growing and the crime rate is rising. Give today to put more women to work and make hope happen for families in need.

“At least 273 people have died and 2,000 have been injured in the unrest that’s rocked Nicaragua since April, according to the human rights arm of the Organization of American States (OAS). … in a series of violent clashes that started in April when the Nicaraguan government announced changes to the social security system regarding pensions. President Daniel Ortega, who is been in power for 11 years, backed down a few days later, but the government’s heavy-handed repression of the protests and the rising death toll ignited a national movement demanding Ortega’s resignation.” 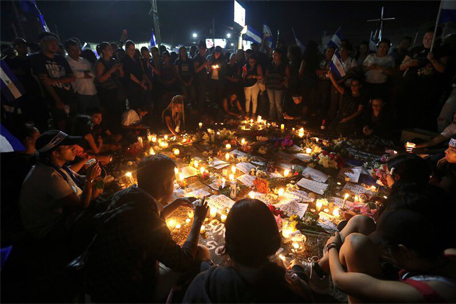 With no clear road to resolution, Supply Hope is making strategic adjustments in order to continue serving through this crisis for as long as it lasts. This includes:

-sending our staff home before dark

-reducing deliveries from three to two times a week

We are trying to raise $25,000 to continue our work through what advisors believe could be at least six months of unrest and instability. We don’t often engage in relief work; our focus is on development. So our response to this crisis is aligned with what we do best. Your financial support will help to sustain our staff as we adjust to operational challenges. As more businesses close and transit becomes more challenging, we see the potential for our stores to become a stronghold within their communities and for our employment opportunities to serve a growing need. Your gift will help to stock our stores with more products and launch new Mercado Fresco franchises in neighborhoods with rapidly diminishing food sources. With no support to fall back on, the poor suffer the most in times of crisis. You will help provide jobs – purpose, stability and dignity – to low-income parents of children in need.

For more details on the fund, email samanthabeach@supplyhope.org.

For more info on Supply Hope, go to www.supplyhope.org.